As I had mentioned in my previous post, 1d6 or Variable Weapons Damage, I have made the switch to 1d6 for personal preference. But, if I continue on with my train of thought, supported by the previous poll, that HPs are a representation of stamina and ones ability to defend ones self while the Strength, or even Constitution, attribute takes the physical blood letting wound damage, I can progress.

Perhaps defending against daggers and quicker weapons reduces the opponent's Stamina faster than the less rapid form of fighting with heavier weapons, but heavier weapons do more damage than the lighter quicker variants when they hit?

Critical hits (usually on a natural 20, though some versions span this out for some odd reason to 19-20, 18-20, etc. depending on weapon) could go straight through to Ability wounds.

In a system where level approaches something akin to experience, perhaps it could play a part in the by passing of taxing the opponent and just 'going for the kill'? Maybe the difference between the level of the attacker and the level/hd of the defender is the range for potential critical. Where a 4th level Fighter attacking a 2hd Monster would crit on 18-20?

But isn't this already addressed with most systems having some form of attack bonus as they level, and how does it play-out?

Perhaps the advantage of level experience should be on the backside of the hit adding the attacker's level, or level difference, to the Ability damage.

I don't know which to start with for play-testing, but I like the general concept and think it lends itself to what I envision as an exchange in combat. I think the difference in level to level or level to hd for additional damage is more what I am looking for, but do you add it to the reduction of Stamina too?

Too many questions to speculate on at the moment. One that just occurred to me is, does this diverge too far from core old school sensabilities?

Over on the Blood of Prokopius blog, the discussion of Variable Weapons Damage using Holmes & Cook. Now, not one to get involved in various version discussions, I was compelled to address Variable Weapons Damage vs. a straight d6 damage model. As I stated there, I grew up on BECMI D&D and have recently switched to S&W:WB. One of the reasons, and as my previous poll alluded to, is that I no longer see a successful 'hit' as a blood drawing wound. So, if I don't, then why make a larger weapon do more damage? I can easily see a dagger wielding foe causing me to 'dance' from a flurry of slashes and thrusts in a round much more so than the swipe of a large axe. Granted a large axe will probably kill me faster when it does connect, as opposed of a death of a thousand cuts from a small blade.

All that said, I had been planning on going with a HP = Stamina / STR = Wound combat exchange anyway, so why not take it a tad further? What if a fast dagger wielding foe did 1d10 'damage' to my Stamina (aka HPs) but only did 1d4 to my STR once real 'wounds' started flowing? And a battle axe flailing barbarian does 1d4 'damage' to my Stamina and 1d10 to my STR?

Or at least something resembling that, should I ever have the desire to go back to Variable Weapons Damage.

Please, go check out my ramblings on Blood of Prokopius, where I might have made more sense, and have a look around. Nice blog if you haven't been there. Tell 'em a rambling idiot sent ya.  = )

By the way, I am heavily sedated on bed-rest at the moment, so please bare with me.
Posted by The Bane at 2:53 PM No comments:

Suppose to be studying for my Security + exam.... bah! more Mini-Gazetteer! Trying to figure out how I want to present it...

Barony of Malvethan: Background
This newly formed barony sits on the Northern border of Aerialdon. It was formed just forty years ago when Sir Deniam Yorkcast, leading a force of Aerialdon troops, pushed out the Goblin occupation that was raiding Aerialdon, and other lands to the South, from these lands. As a result Sir Deniam Yorkcast and a select few of his men were given estates within the lands now known as the Barony of Malvethan. Though the pre-existing independent towns and village were unable to work together to handle the previous Goblin infestation, some local inhabitants still do not like the current occupation any better under the current rule of Baron Deniam Yorkcast and his Manor Knights.

My Decleration of Intent seems to have gotten my mind right! The writing has begun and the big change for me, other than scrapping a large chunk of the bad fiction, is that I have decided to use Microlite20 as my go-to-rules set. I realize that many might not consider it 'OS' to use an SRD derivative work, but playing with Microlite20 with my girls sure has the old style vibe for me. Take it or leave it, I am confident that I have made the right choice. Especially after working on something as small as the Mini-Gazetteer using S&W:WB. 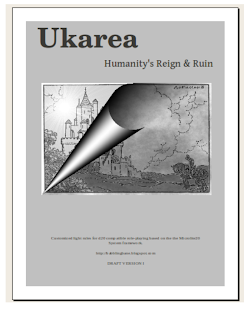 Just a rough mockup for a cover. Though, I am not sure what more I would want in one to be honest. Alot of my layout inspiration is coming from Beacon at the moment.

Wow, what a week!

I haven't done much blogging this week, but I have been thinking some. Mostly about two things; what house-rules do I want / need to get the feel of the setting that I am trying to convey, and to a lesser extent, what rules should I use to base it on? The second, surprisingly, for me got answered thinking about the first, for the most part.

Design considerations. I wanted something that gives the feel of older style play, rulings not rules. I have two distinct settings / feels within Ukarea history that need to be covered. Produce something! - I have been ruminating on this for years, time to finally get a product out. Show, don't tell - it is more than just a presentation goal - time to put something down in digits from the myriad of notes. Scrap 80-90% of my notes! It is mostly bad fiction anyway. Less reading, and more writing. The more blogs I read the more 'great ideas' I have, but the less writing / development I do.

Ok, this blog post may not mean much to anyone reading it, but it is a major step for me I believe. More to come on my decisions and why. But for now, I am just excited to have finally made some solid decisions.

Thanks for stopping by,
TB
Posted by The Bane at 11:55 AM No comments:

While digging through a multitude of bookmarks, to see what I could dislodge from the browser, I found two that I had forgotten about and would like to share:

Dawn of Worlds: a minimalistic world creation game that allows you and your gaming group to build a full fledged setting from ground up. Roll some dice, spend the points on anything from terrain creation to cultural explosion and wars. When the evenings over, you should have a map, time-line, and a lot of fun!

The Mule Abides: 9 Minute Campaign Design. An old post from Nov 2009 that asks questions to assist in describing your campaign setting in '9' minutes...

Nope, I can't do it either. But interesting none-the-less.

Poll: Every Hit Point of Damage is a...

Seeing a few of the recent posts on 'critical hits' and 'damage below 0' tables, I pulled up an old Trollsmyth bookmark: Playing with Death and Dismemberment. Why I had bookmarked it in the first place wasn't for a critical hit table, but for the novel idea of helm affects that were presented. Something that actually gives a reason for writing 'helm' on the character sheet in Oe D&D!

Now in retrospect, I like the idea of how it strengthens the idea that hit points are not necessarily physical, or at least not major life changing physical, until you get to below zero. I have often toyed with the idea of changing the name of Hit Points to something else, but just could not find the right noun. Besides, I might be burned as a heritic.

With this however, I imagine that armor would be better suited as DR. I don't know. What I am curious about is how do you envision/play-out hit points in your game?

I got side-tracked doing research for Ukarea and thought I would take a break and work on the Mini-Gazetteer. I have the map I created earlier, and wanted to work on populations and how they corresponded to each other before adding a bit of detail to the notable NPCs. I started with this: 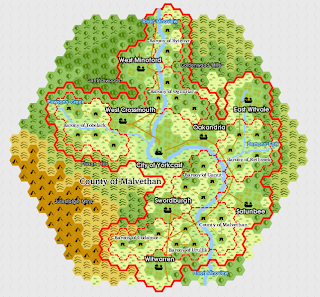 Originally I had some ideas, but none near enough to get a feel for the whole setting. So, I turned to some randomness and color: 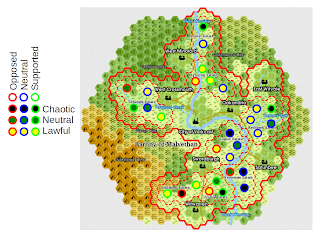 I was going to elaborate on the results, but think that I will leave it up to the interpretation of any GM that might want to use it.

Immediately things jump out at me; take the Haverosse Estate in the South-East. The estate's Vassal Knight is Neutral and opposed by his populace. The other two Haverosse Knights are Chaotic and the populace is ambivolant. Perhaps the Vassal Knight's people are unruley do to the success of the other two Haverosse Knight's? Perhaps, if the Chaotic Haverosse Knights throw in with the supported Chaotic Knight in the Urullik Estate, they could overthrow the Lawful Urullik Vassal Knight there? The supported Neutral Urullik Knight would probably not interject, and the Neutral Haverosse Vassal Knight could be usurped, turning the two estates 'Chaotic' and against the Baron in short order? As long as the populace in Haverosse did not change their oppinion of their rulers for doing so. (Reaction Roll please...)

I like it. Falls into the inspirational, without giving too much mind-numbing detail, I believe.

Thoughts?
(other than my spelling sucks: Blogger doesn't seem to want to assist me with it today)
TB
Posted by The Bane at 3:46 PM 2 comments:

More GIMP Goodness: I was messing with the peel-back of the last image I had done, and suitably darkening up the Humanity's Ruin pic, when I decided to try something else... 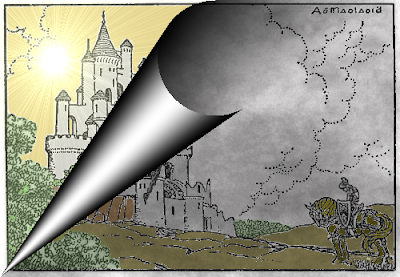 Kinda wish I could figure out how to have the before/after knight showing rather than the castle before/after. But, I am digging it. 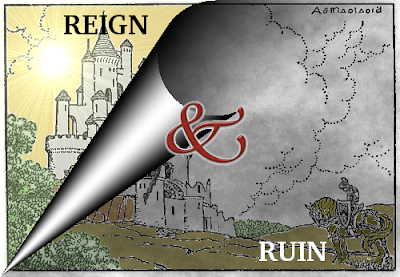 So I started messing around with the Humanity's Ruin image and the OCD and ADD kicked in: 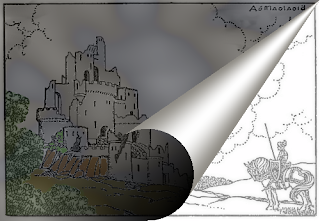 While I was posting the above, I had GIMP minimized and when I returned to it, this was there: 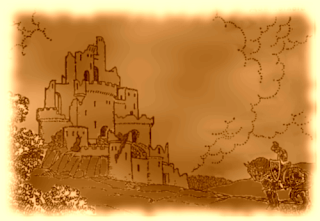 I can't explain it... perhaps my keystrokes were still effecting the image? It was the only layer and was called Copy#8. Strange! If I could only do this to the 'Humanity's Reign' image!

I got to thinking I wanted some images for Ukarea. Searching the Internet I found this in the public domain: 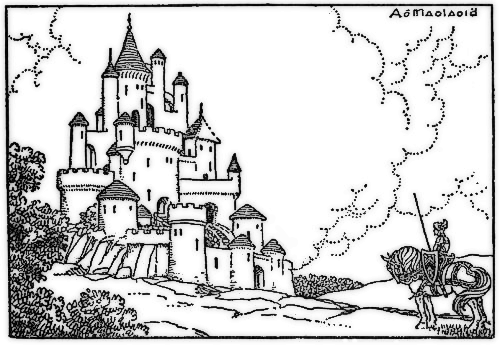 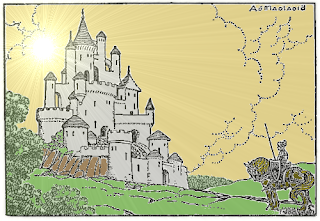 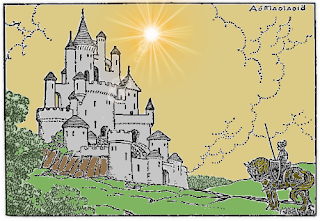 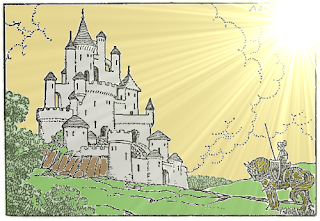 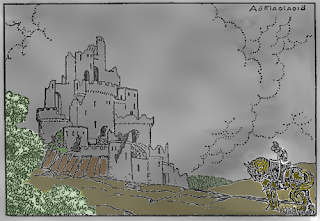 I obviously have some work to do on the Ruin image. I don't like how the light on the leaning knight hits him, and want to add some shadow to the ruins.

I would love to hear which of the 3 Reign pictures I should use though... 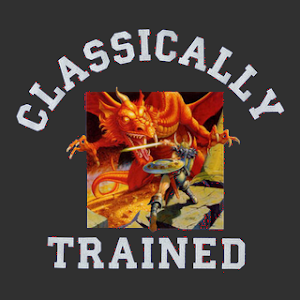